Return of the Kirby

So after a lot of discussion and sailing trips with my oldest son, we decided to pull the Kirby off the hook in Sooke.  It has swung on the hook silently for many years with only sporadic use.  As of late, it unfortunately only saw action when I'd go out to bail out the little but of rainwater which would find it's way into the bilge.
The short, 76NM trip from Sooke basin to Ladysmith Harbor would include a three day cruise on the Juan De Fuca, race passage gulf islands and home to the protected Harbor of Ladysmith.
We spent the first day upon arrival loading our gear, mounting the outboard and scraping the thick carpet of mussels and growth off the bottom.  The water was cold when we beached the 5 foot keel in the sand and jumped over the edge up to our chests with scrapers in hand.  We slept good after that until the early morning wake up to catch the favorable tide out past Whiffen spit. 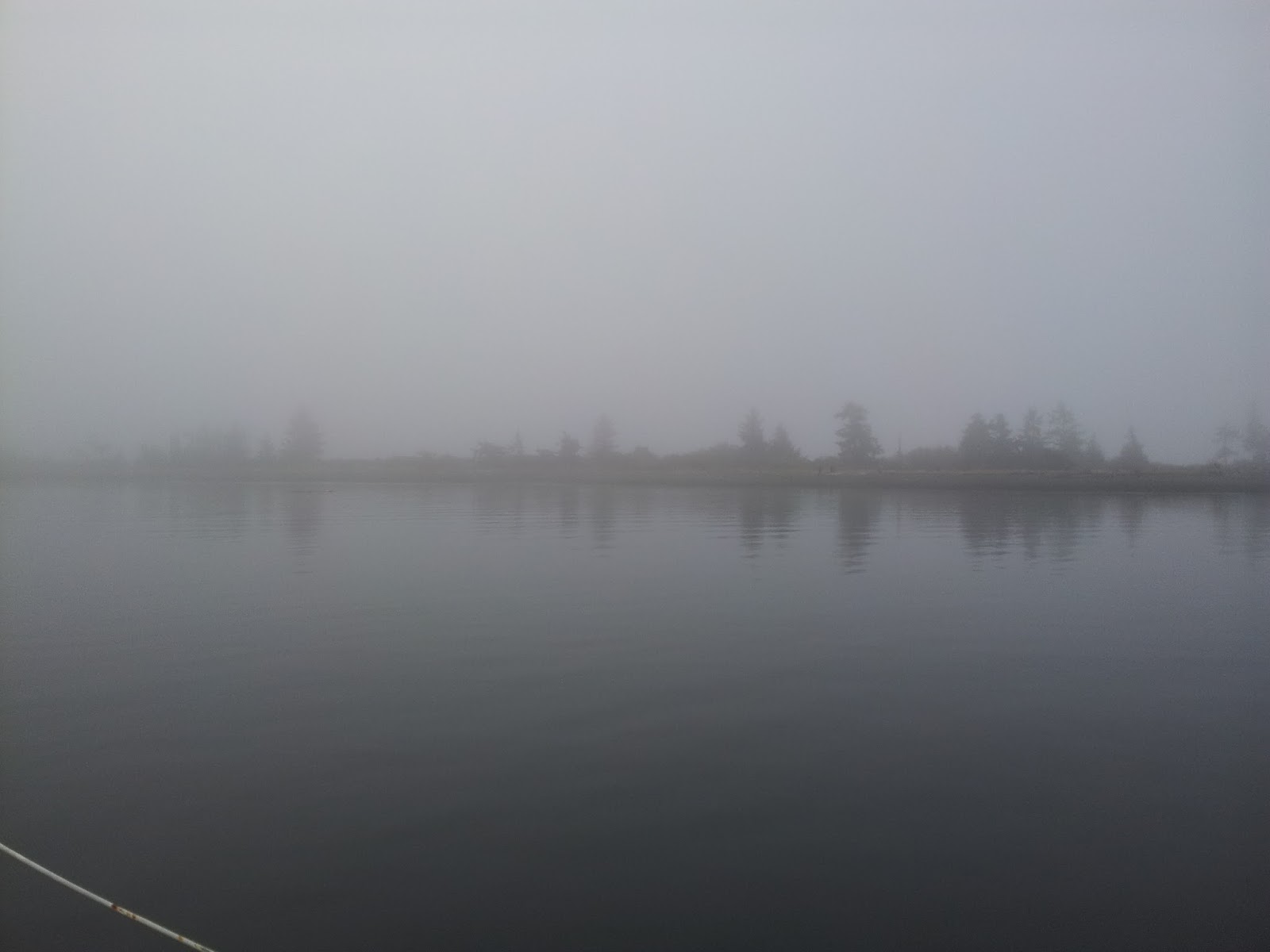 I woke early and poking my head out of the companionway, I see what I expected....  Fog had rolled in thick making everything cold and wet. 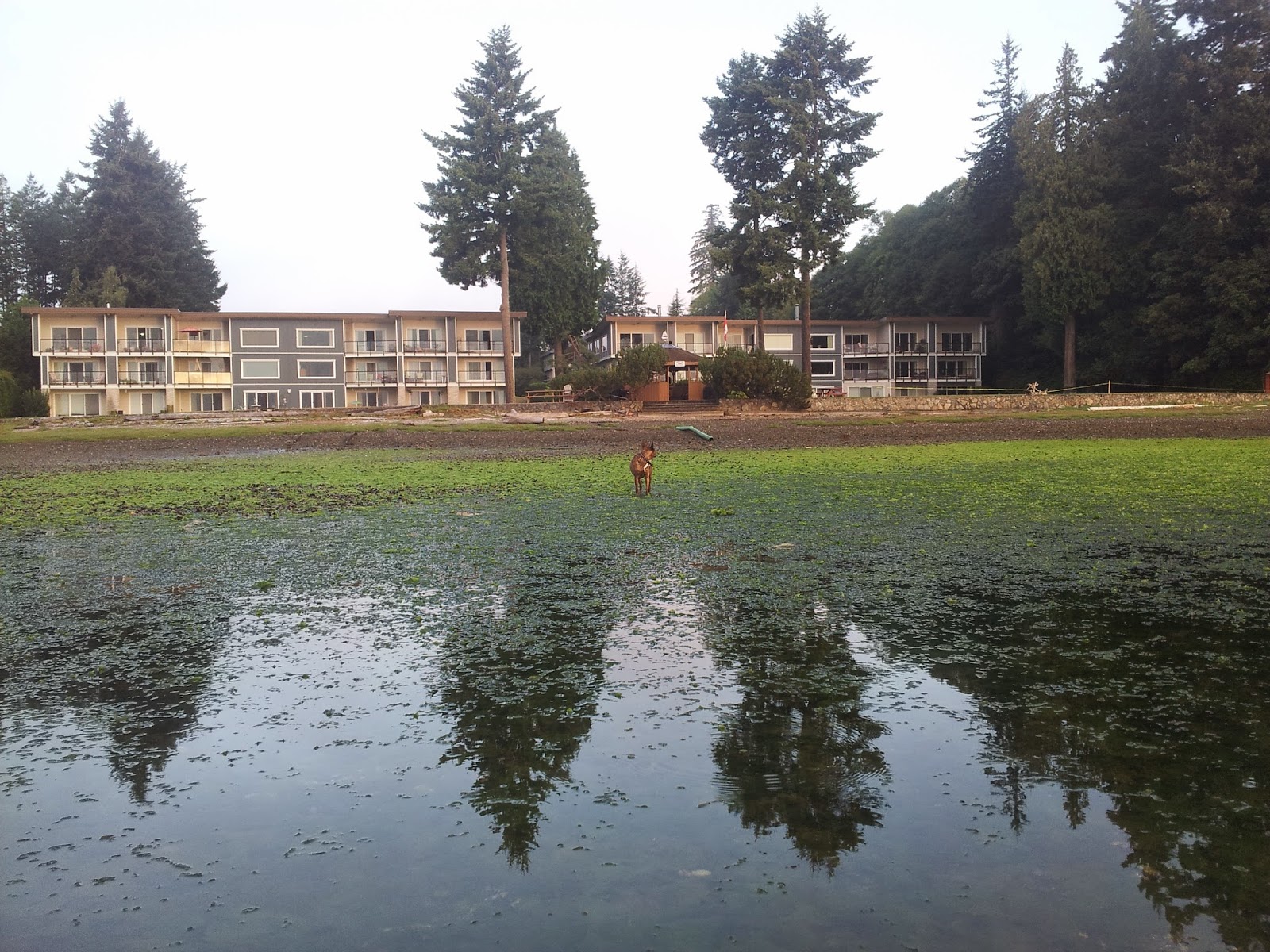 I headed for the beach to let duke have his morning run before setting out.  We exited the basin, picking our way through the fishing fleet under thick fog and pointing the boat for Race Passage beyond the fishing grounds.  Wind was light in the fog but we knew it would freshen once the sun burned a hole through the fog. 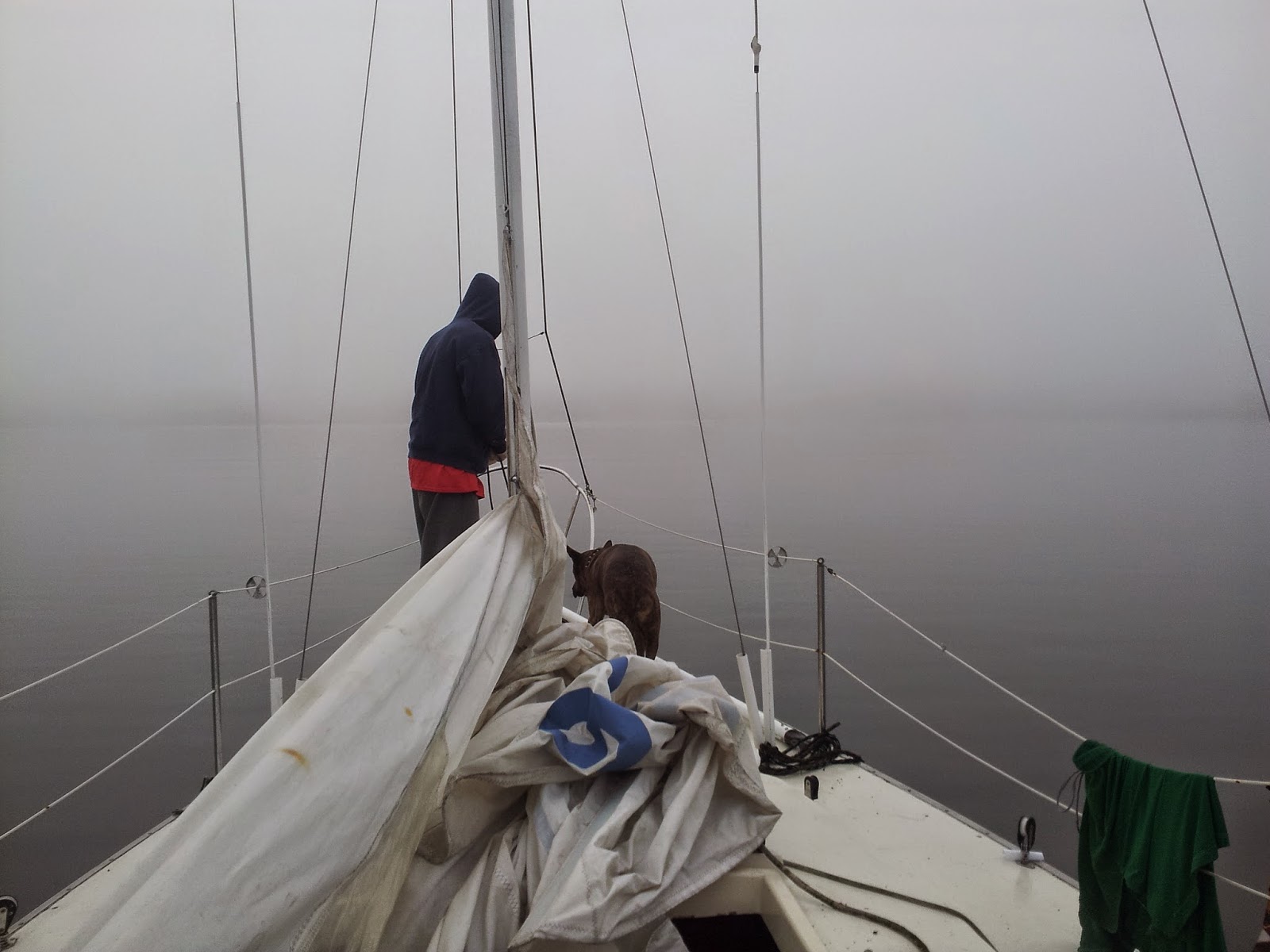 By 10am, the sky was blue, wind had freshened a but and we rounded Race Rocks on a favorable flood and set course for Discovery passage.
We would spend the next 5 hours doing drills in the light wind(forecasted 15-20knt wind never did show up) and convergence zones as the cruise ship passes us by.  I couldn't help but think as this giant ship passes us by enroute to unload all it's paying customers on their adventures in luxury to Alaska, what we must look like to them. 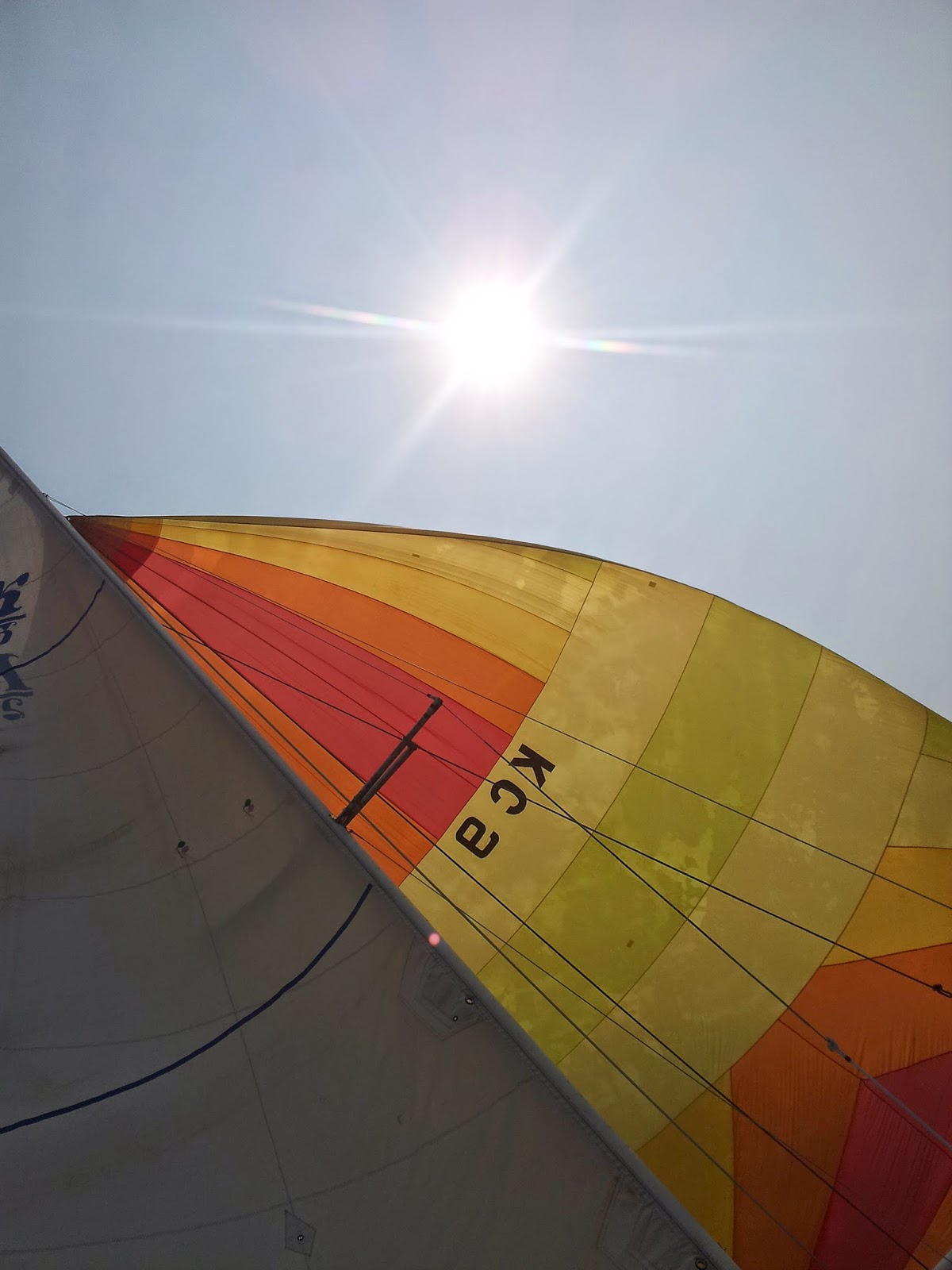 This tiny little 25' racer with full sails up, running spinnaker.  I know we noticed the giant plumes of thick black smoke coming from the stacks on that massive stink pot.  We pressed on, hoping to catch the last of the favorable tide past Discovery.  The Kirby slipped silently past Victoria, BC amongst a big pod of porpoises feeding in the currents.  Ultimately we would see two distinct groups of porpoise. 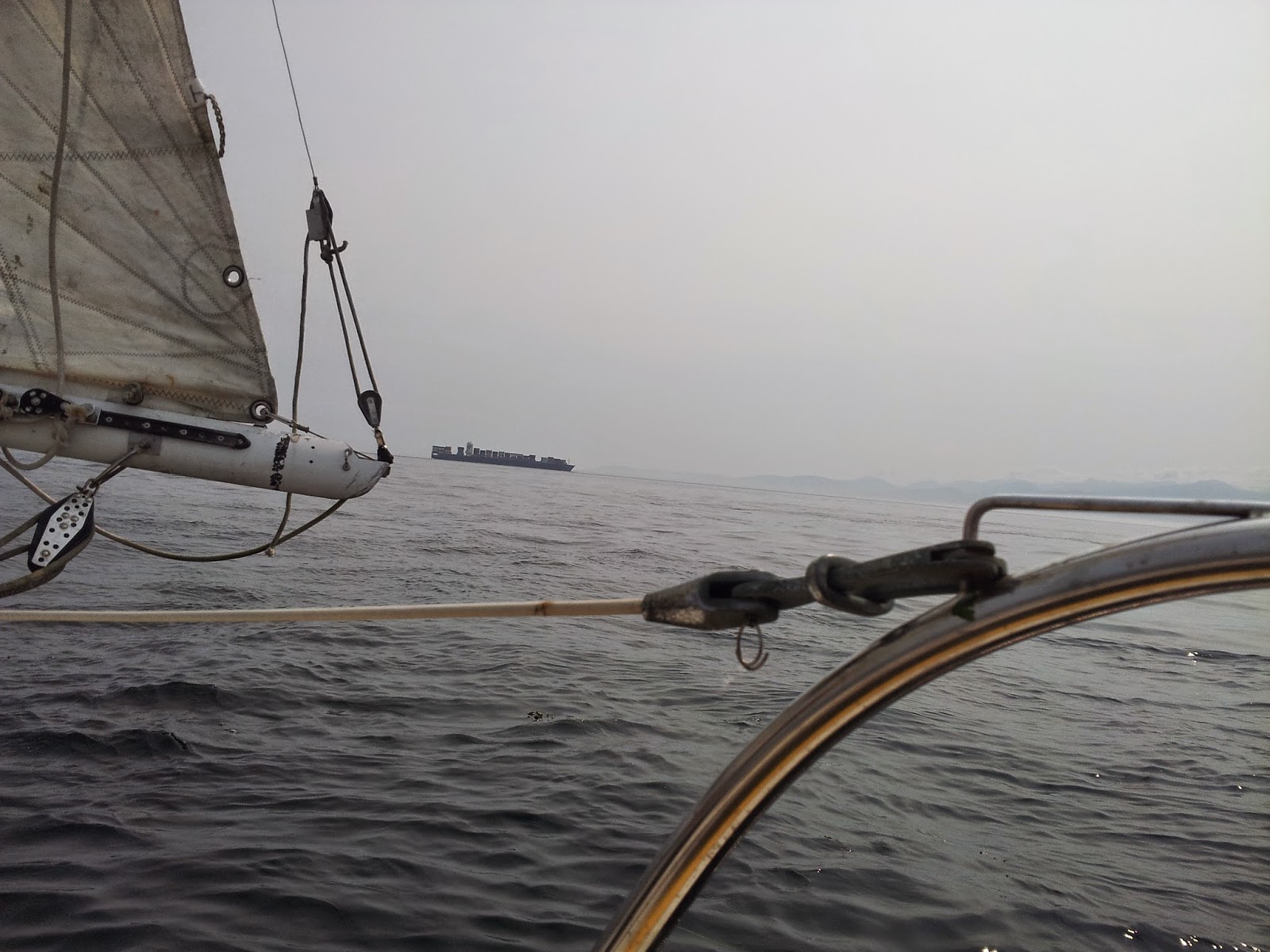 Wind stayed light throughout the day. As freighters passed us enroute to far off destinations. 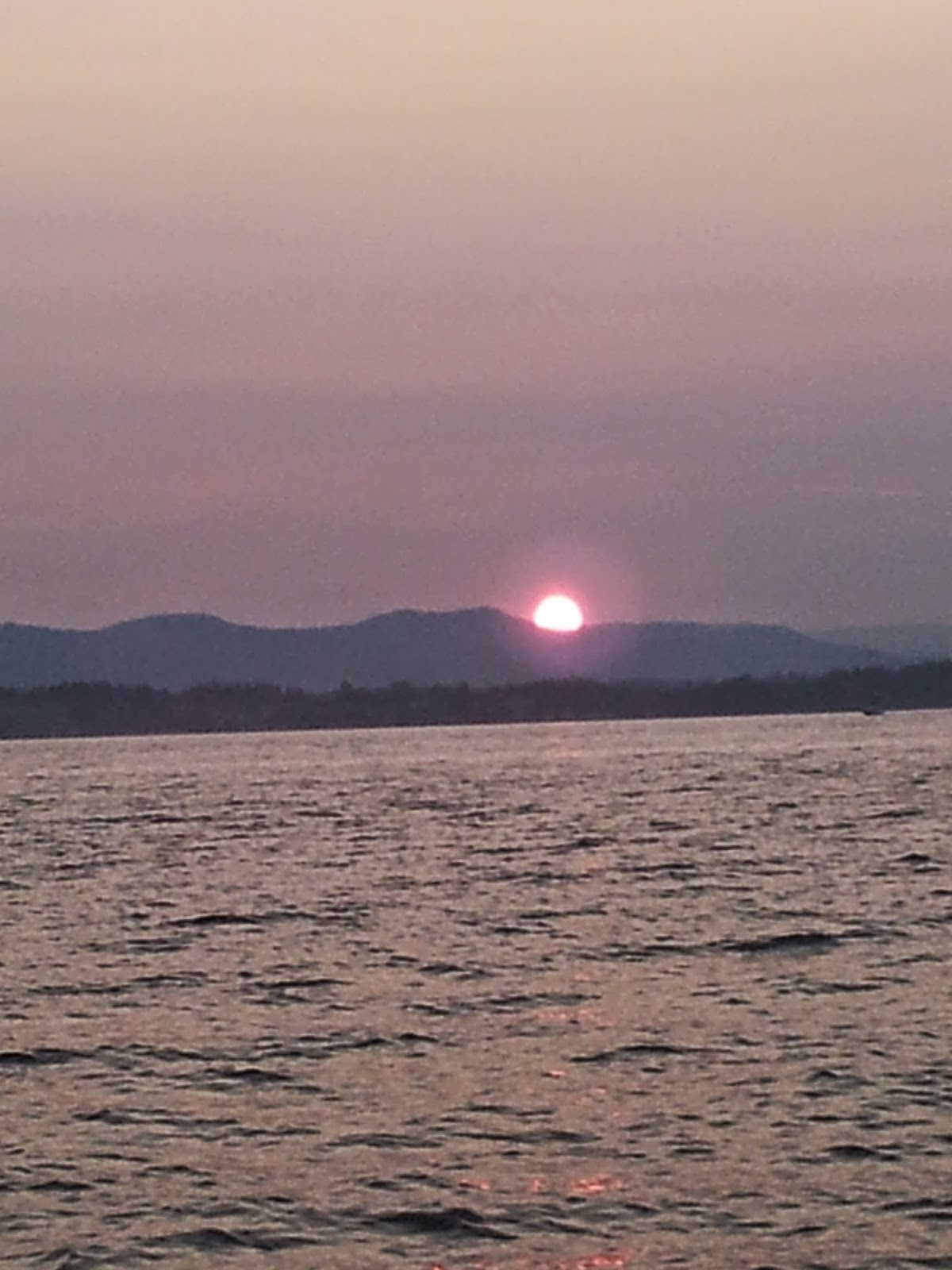 Day one came to an end with a beautiful sunset shining bright red, sending bright pink reflections across the water.  Very surreal where you can find yourself sometimes.  At this point, we are just about at our destination which is D'arcy island.  I have never anchored at this location yet but the charts show a few possible anchorages. 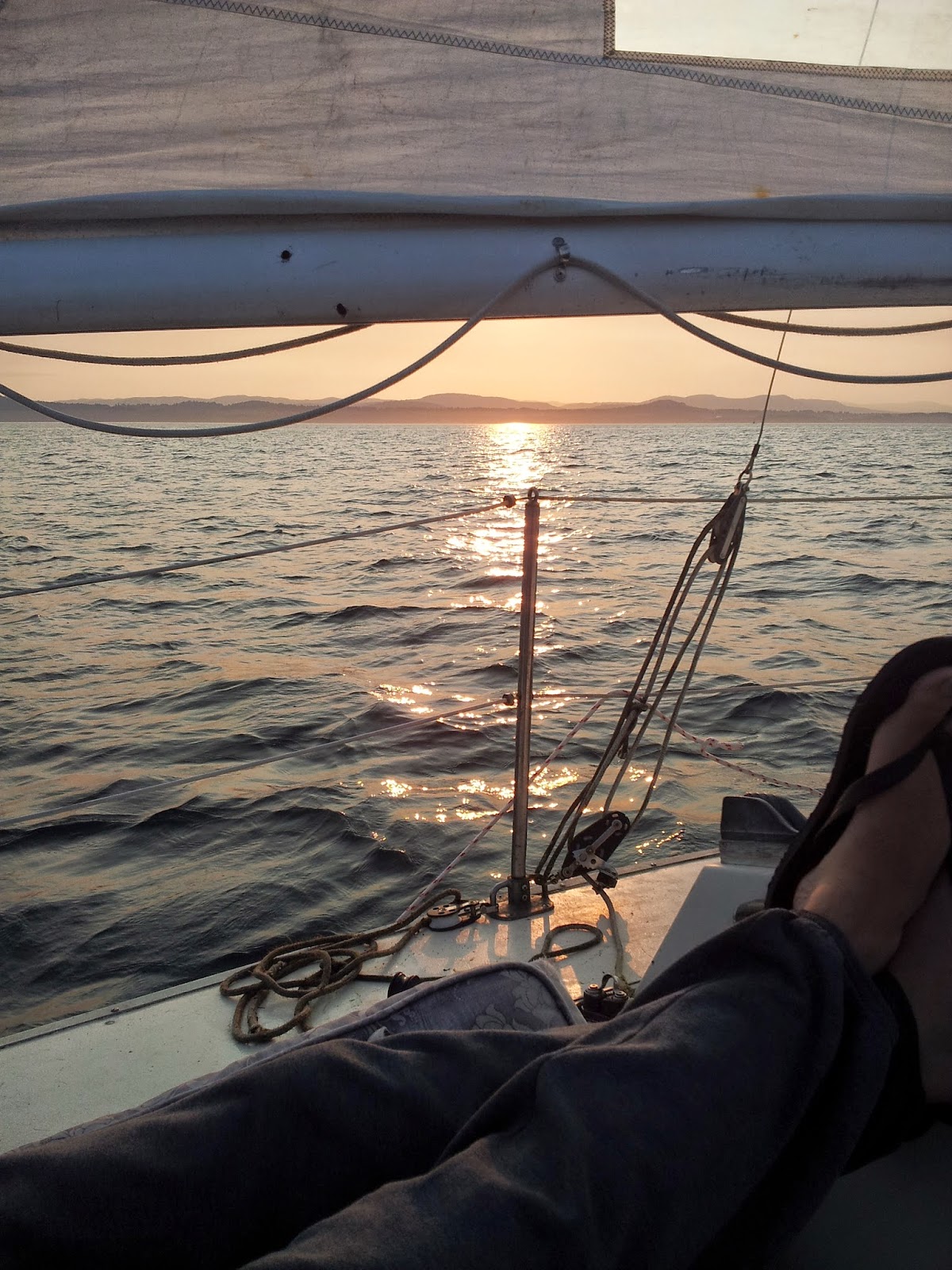 Although current swept, if we can find a good spot, this will be good information for future possible hiding spots as the wind can kick up big seas in this area.  Besides, poor Duke looks like he is ready to burst, he needs a beach... 48'34.366'N  123'16.795'W 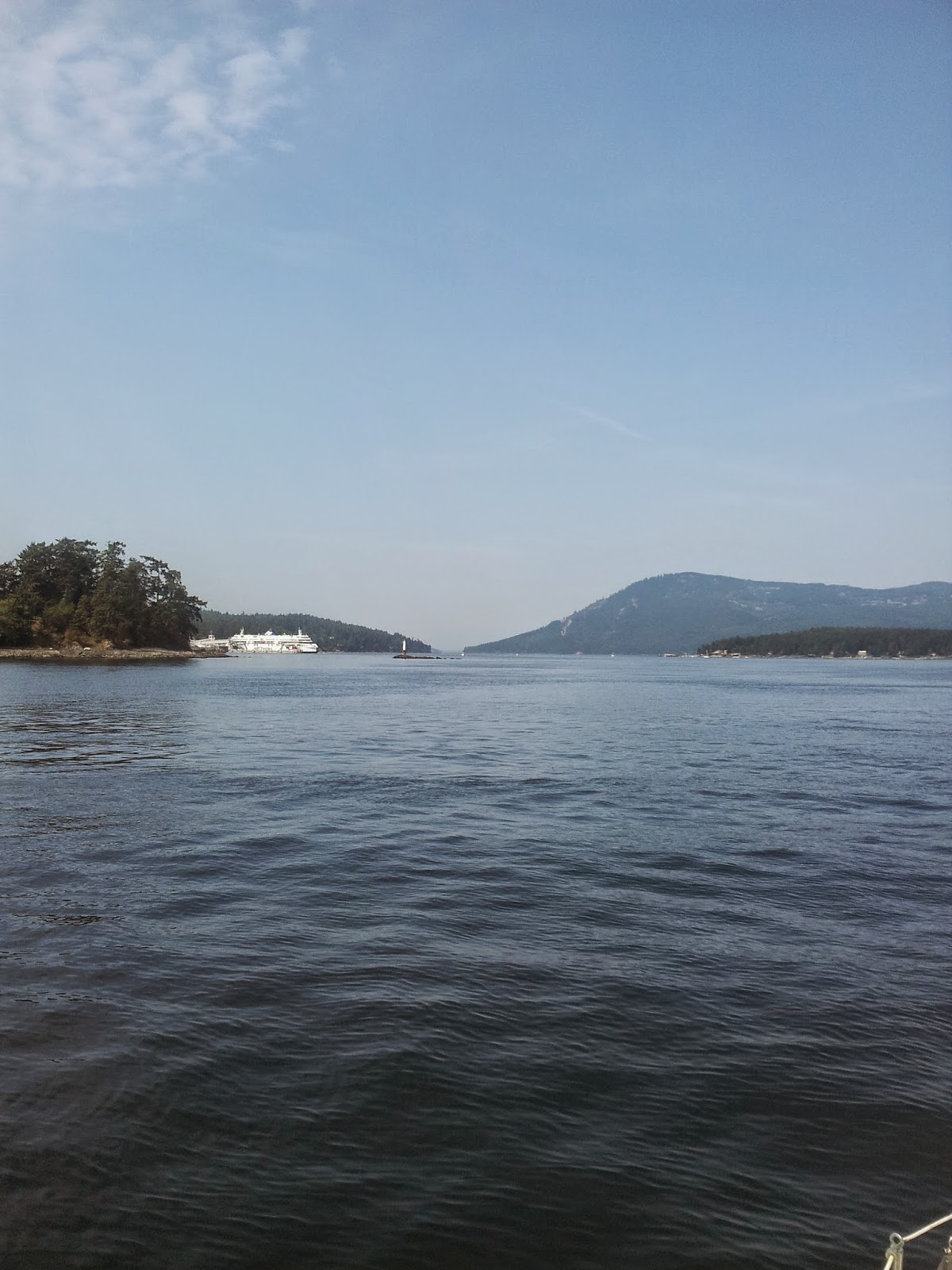 We found a great anchorage, naturally protected by surrounding reefs in approx. 25ft water.  The current is quite fast here but you are snug in a sub ocean cove making it very still, clear water.  The phosphorescence was alive tonight.

A full day of sailing makes one hell of an appetite which only a bbq can satisfy!  two huge burgers later, we both settled into our bunks warm and dry. 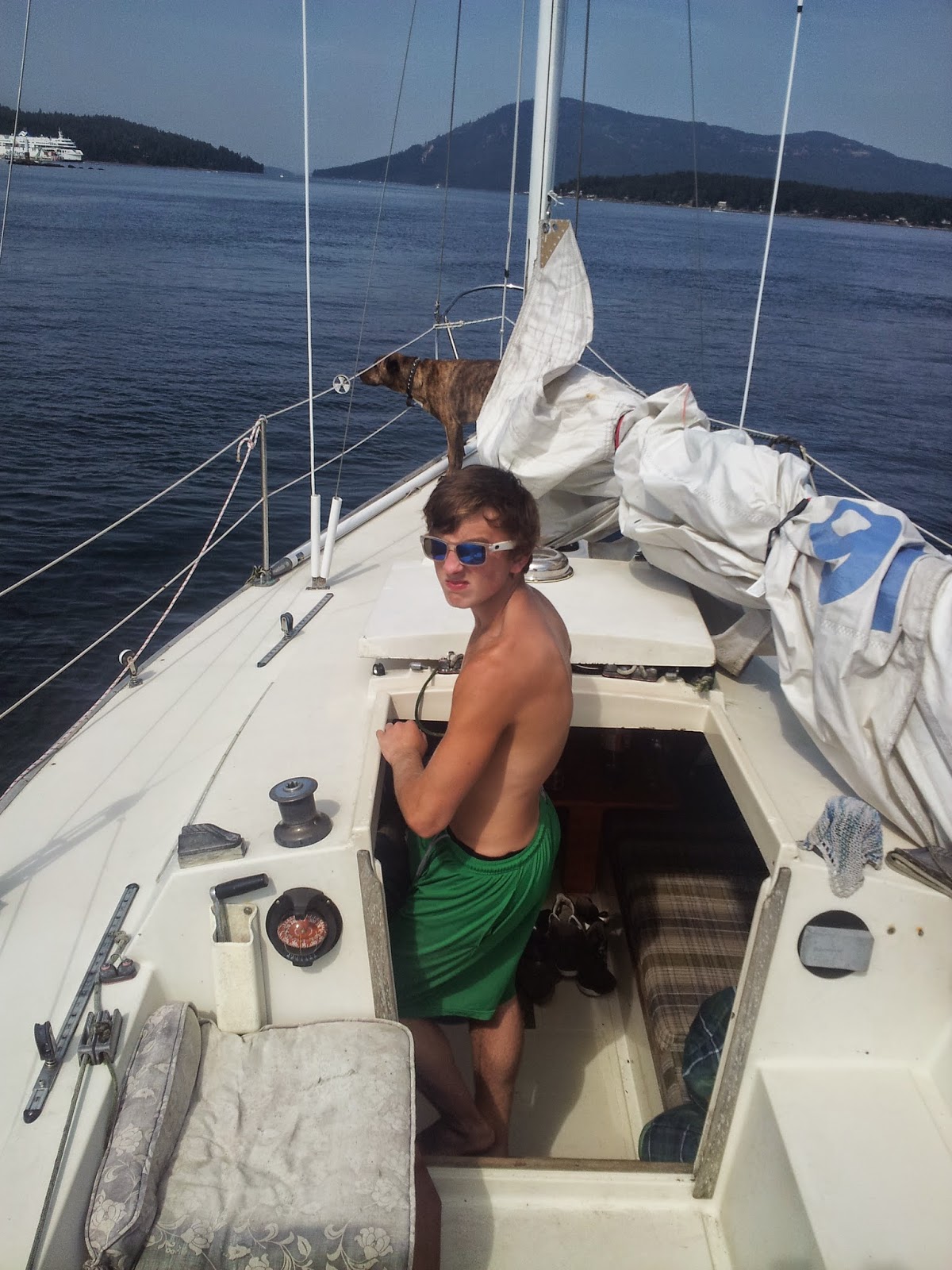 The morning came early again, although we hit snooze a few times. We emerged from the boat, took Duke for a run on our private sand paradise. No fog today, blue skies and flat calm seas.  We hoped the wind would pick up but no luck, we set out under power which ultimately would be the story for the day.  Under power, we can take a more direct route and fast. 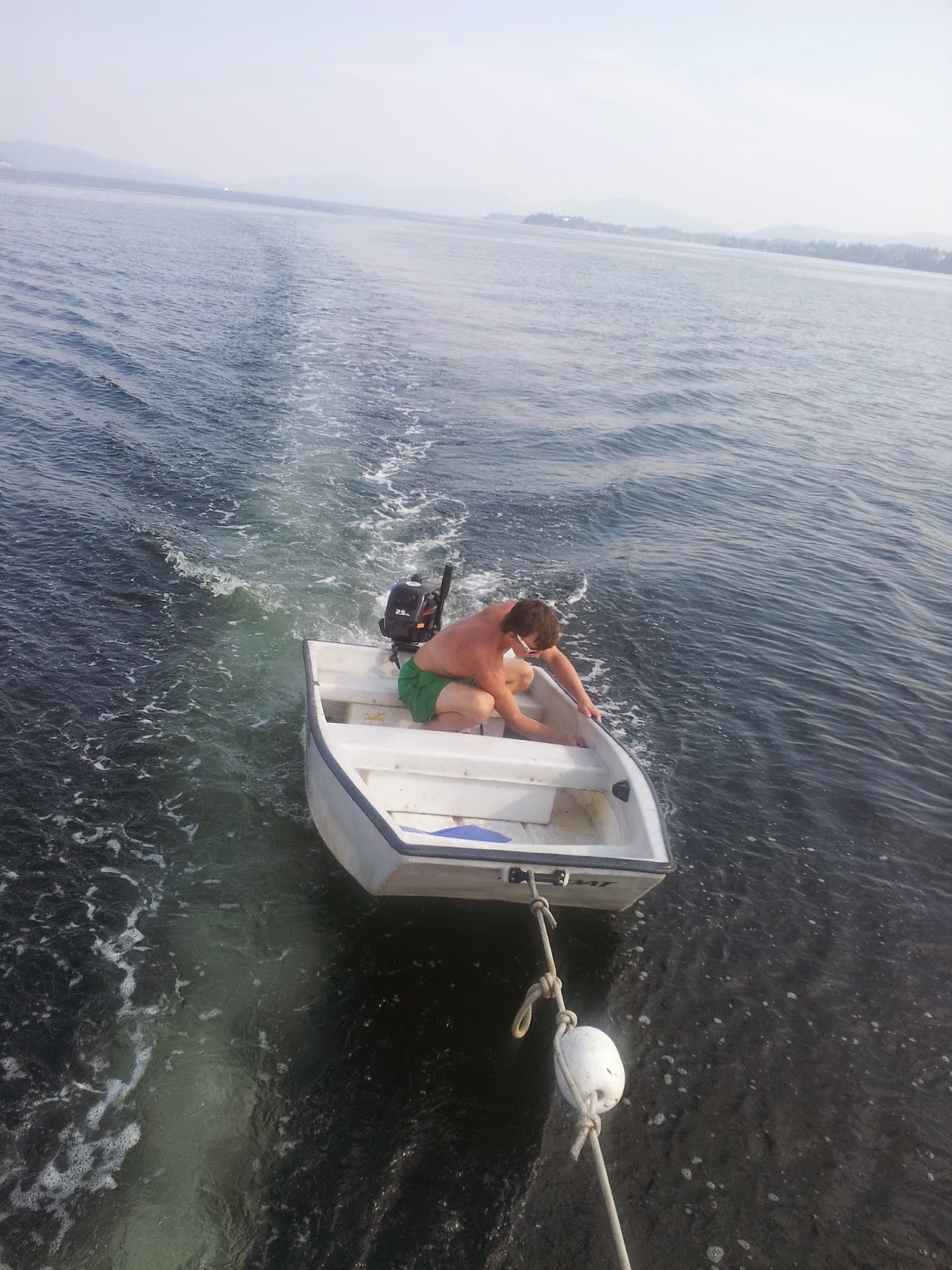 This gave us time for a few cleaning jobs, drills and good times. We weaved our way into the islands, past Sidney Spit, past Sidney, through the channels between Coal Isl. and Goudge Isl. and along Saltspring Isl. through Satellite Passage. 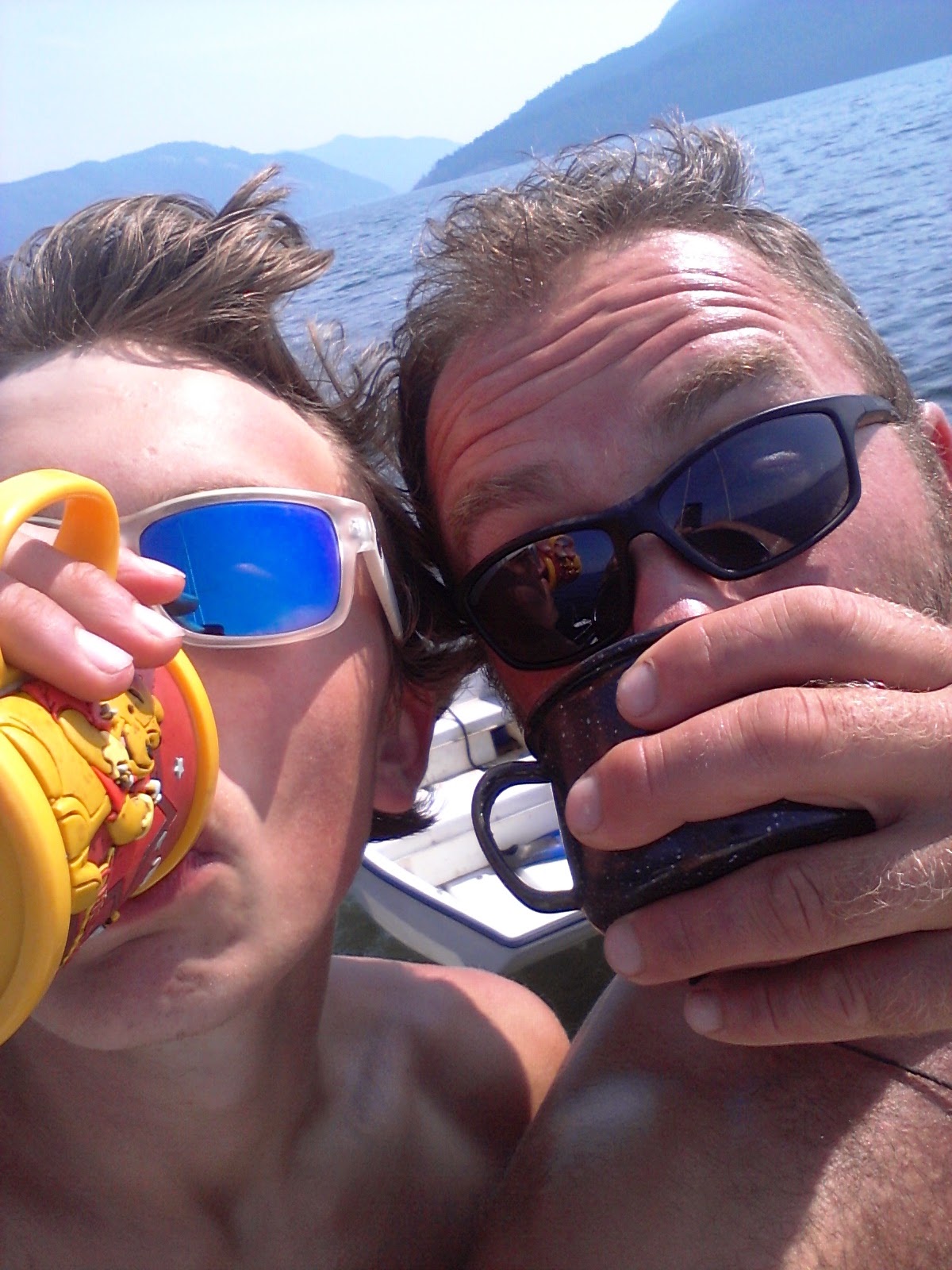 At the speed we are going(Kirby cruises at 7knt under power) we will make the flood through Samson Narrows.  Might as well make the boat delivery a day early. 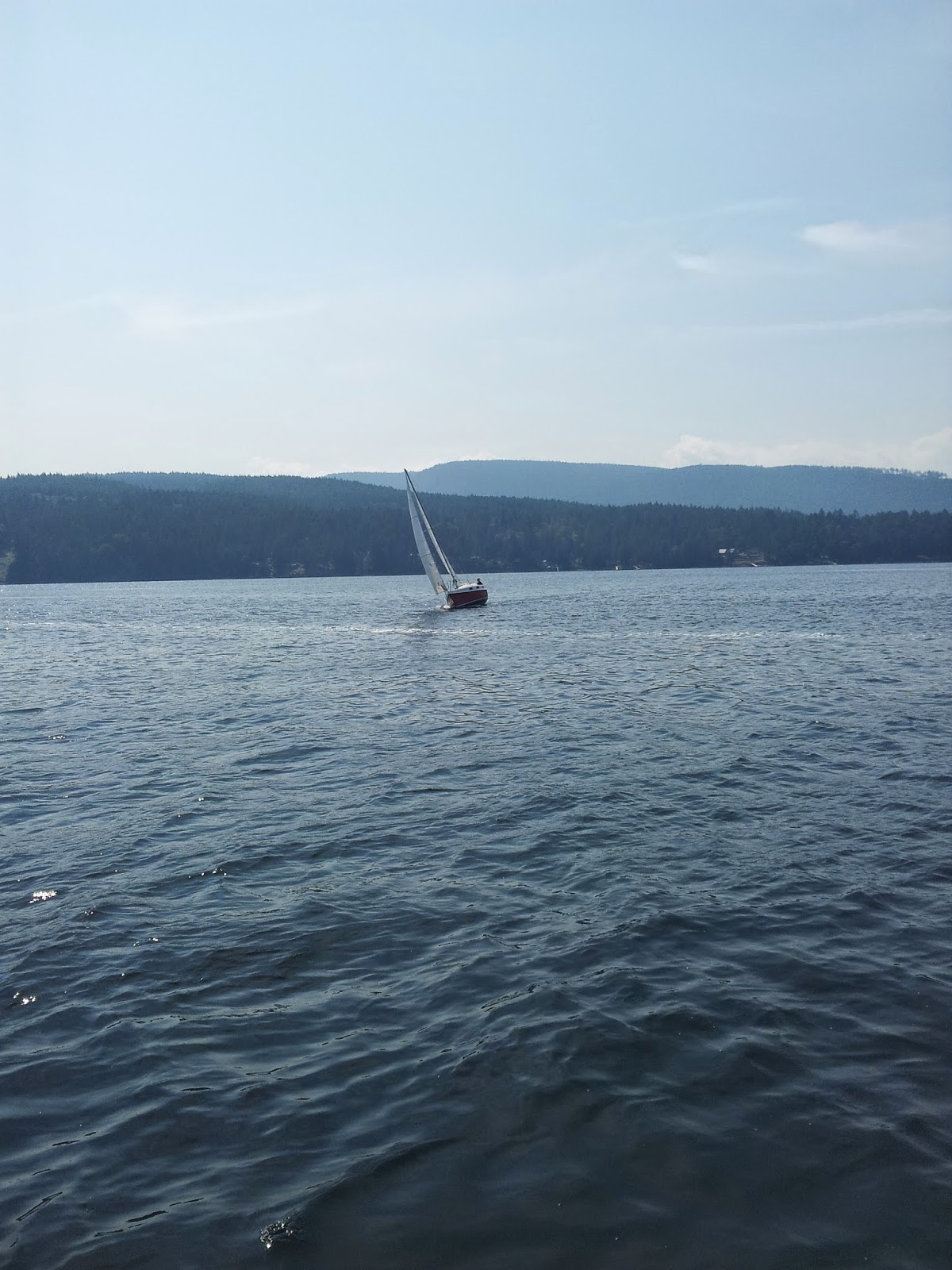 We enjoyed watching some of the other small sailboats catch the odd gust of wind as we powered for our destination. We were itching to hoist the sails but the wind was on our nose and we have dedicated to the inside route around Saltspring which means we need to catch the tide.  Power on, we will. 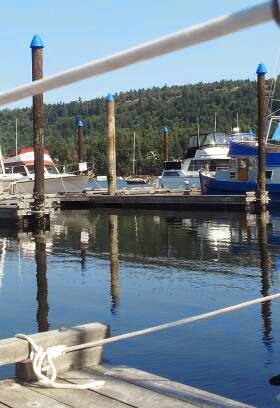 We arrived safely in Ladysmith where she sits happy and clean. Ready to be sailed by Dayton as he hones his skills on this perfect little race rigged boat in the relative safety of Stuart Channel.  There is quite a bit of elbow grease needed to clean and lube all the clutches, sails and gear but she is seaworthy, safe and a lot of fun. 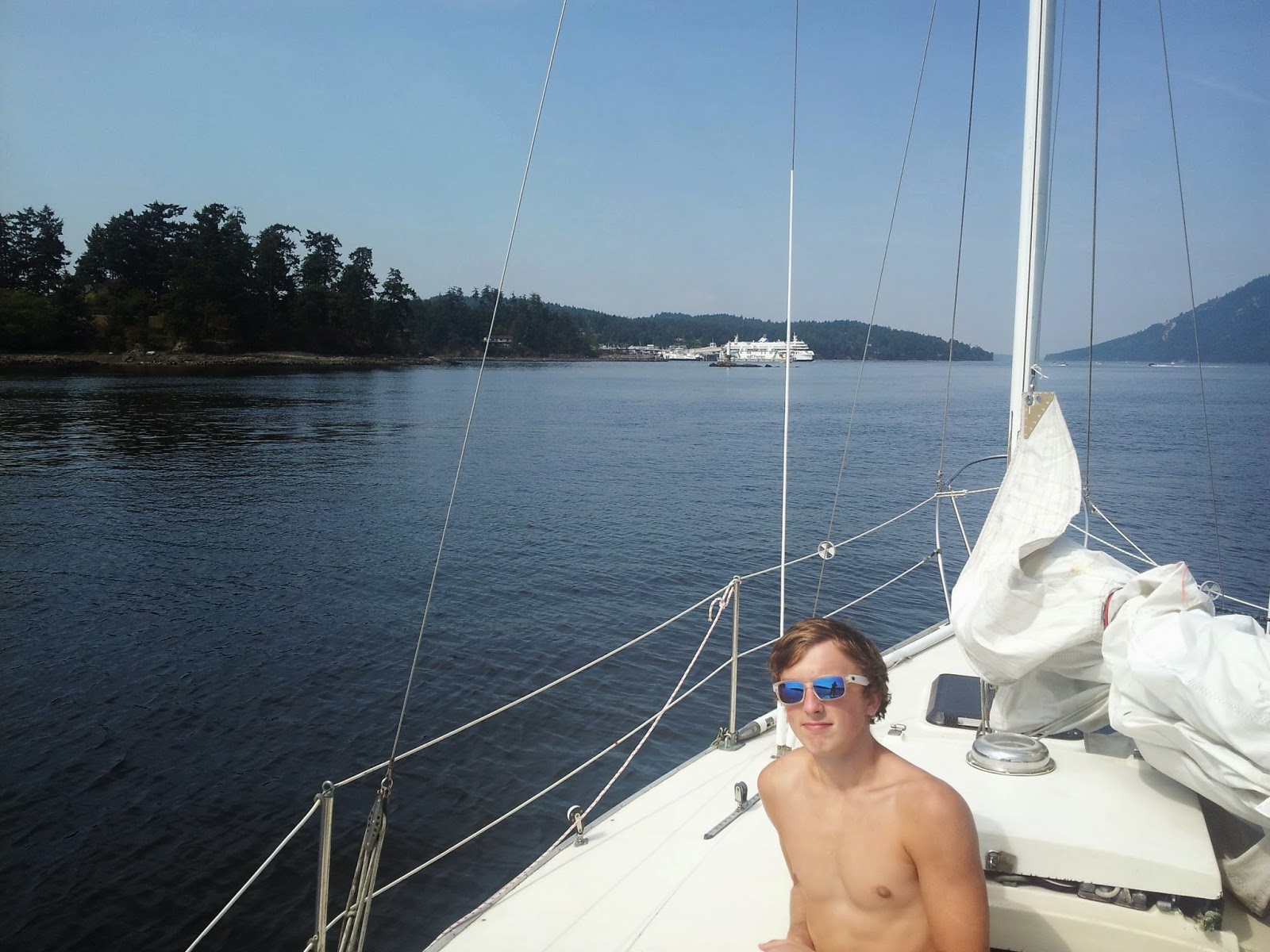 The beginning of the passion. 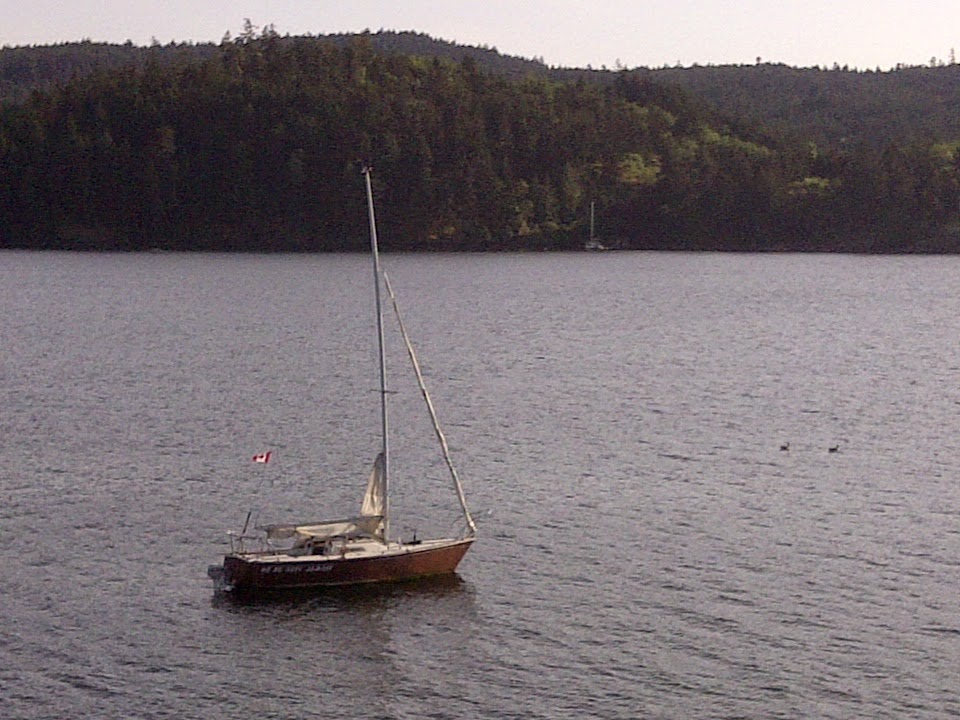 Many years ago, I was a typical boater, ripping around the local waters in a power boat.  Raised two kids on and off the water for many years.  We had a big 'ol stink pot.  It was great to see the kids take to the water so well.  But the natural progression for me was to a sailboat.  I looked around and found a beauty of a little Kirby 25'.  On Ne Sait Jamais. 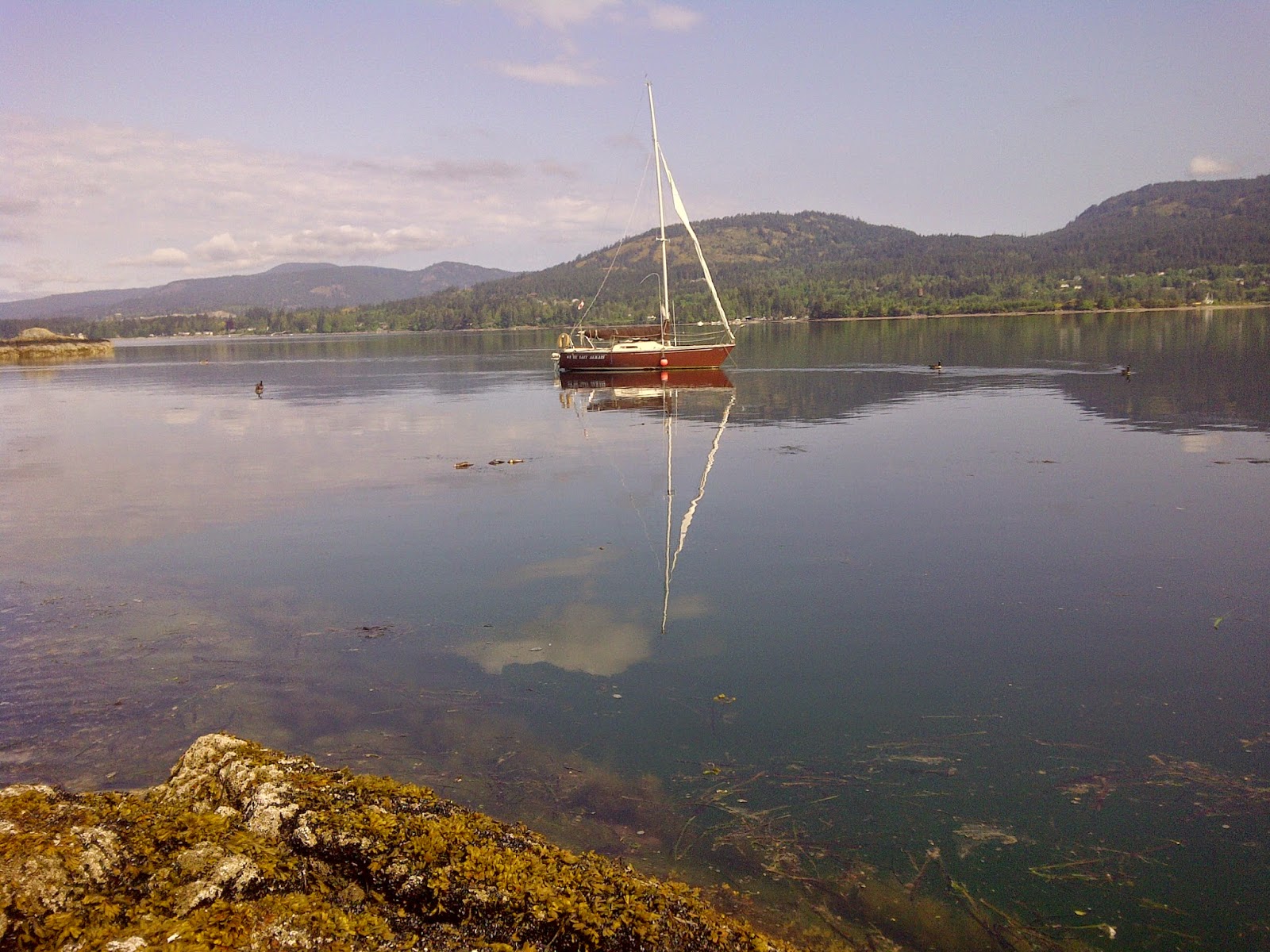 We sailed her from Nanaimo to Mill Bay, BC where I sailed her all around the gulf islands including Saltspring Island, Thetis Kuper, etc..  Eventually I moved her to my property in Sooke where she lives now tethered to a buoy in front of my house.  She is fast with her full race rig, fractional sloop.  The Juan De Fuca is her playground and where I slowly built my skills in the bigger water.  A bucking bronco, she is. 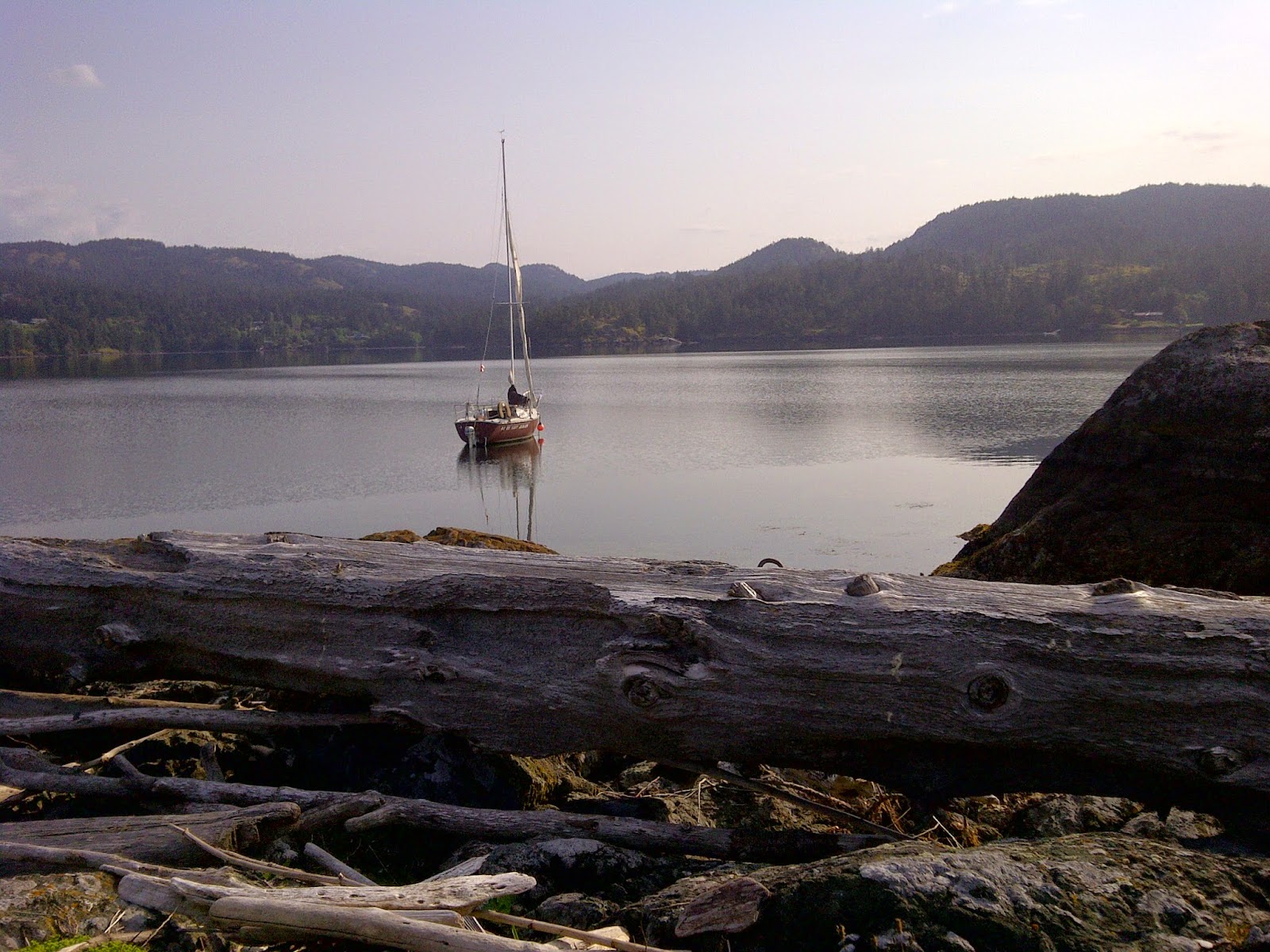 My sons both have become very strong sailors as they would have too, being my boys.  I hope that in the future, the seeds I have planted on the water grow to a passion in them as well.  We honed our skills for many years on Sooke Basin and the Juan De Fuca...  She rides strong and fast in the 5-8 ft swells and the directional but sometimes gusty 15-25knt wind.  The Basin offers an unbelievably nice moorage in front of my house.  Never raced her but her fractional rig and fully adjustable mast tensioning made her a great learning vessel.


The dream continued to grow with thoughts of sailing over the horizon to far off lands.  The Kirby is too small...
Posted by Unknown at 19:33 No comments:

I made the selection and bought the Albin Vega..  This boat was selected after a few years of research into micro yachting, and single handed cruising blogs/stories.  The Albin Vega 27 is a world renoun'd mini ocean cruiser, easily handled by one or two crew members.  They are robust, short rigged and surprisingly comfortable for their size. 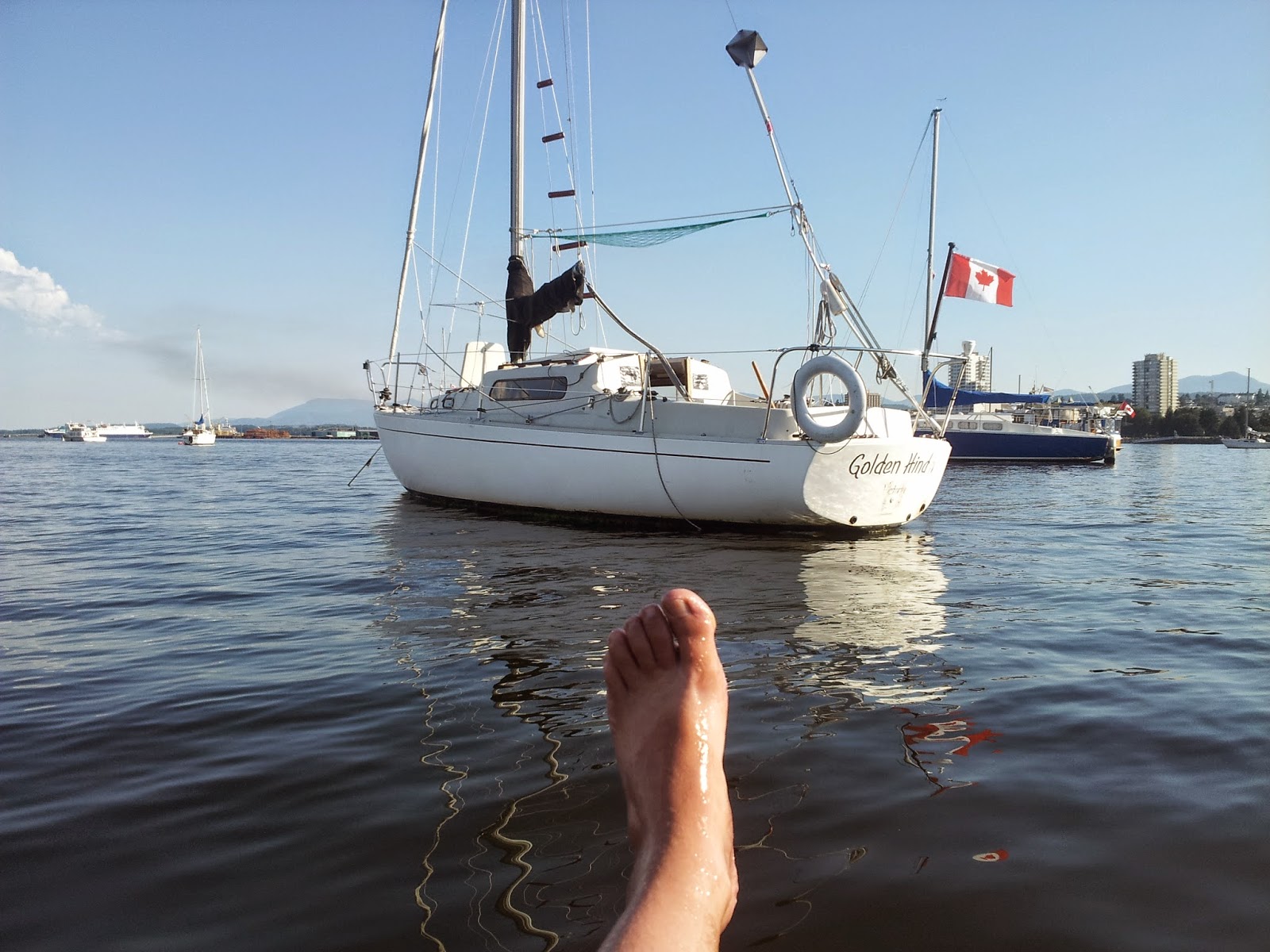 My Vega needed some work after the previous owner was only able to partially complete many projects...  She is fully rewired with a complete NEW power management system from dock hookup to charging to LED lighting.  Since then, I have added the solar equipment and wind turbine from the good folks at www.islandlifewholesale.com  . 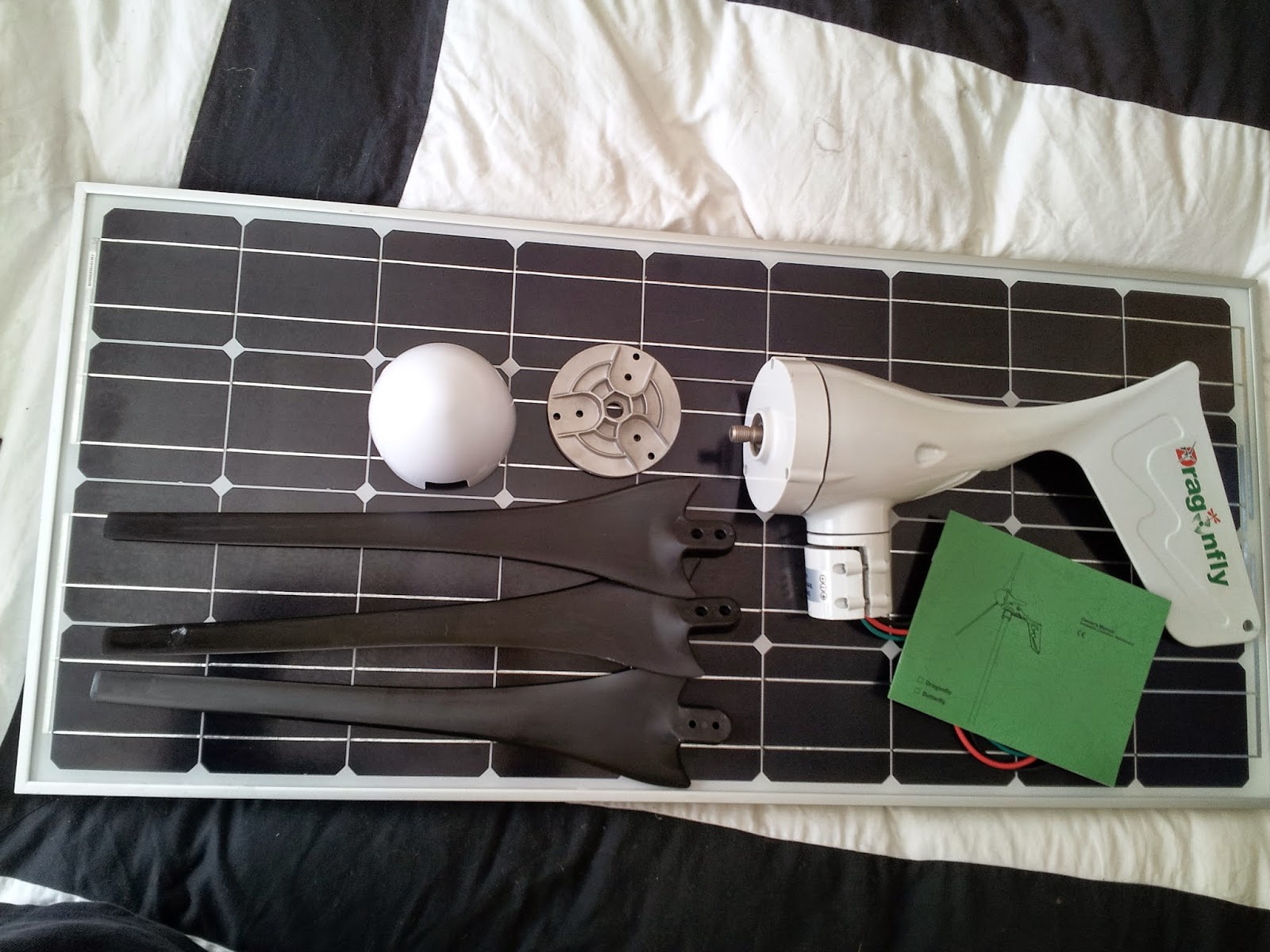 Now my little lady is fully powered with state of the art chart plotting, GPS, sonar, AIS and VHF and SSB communications.  Soon the new sails will be added along with all new soft rigging. 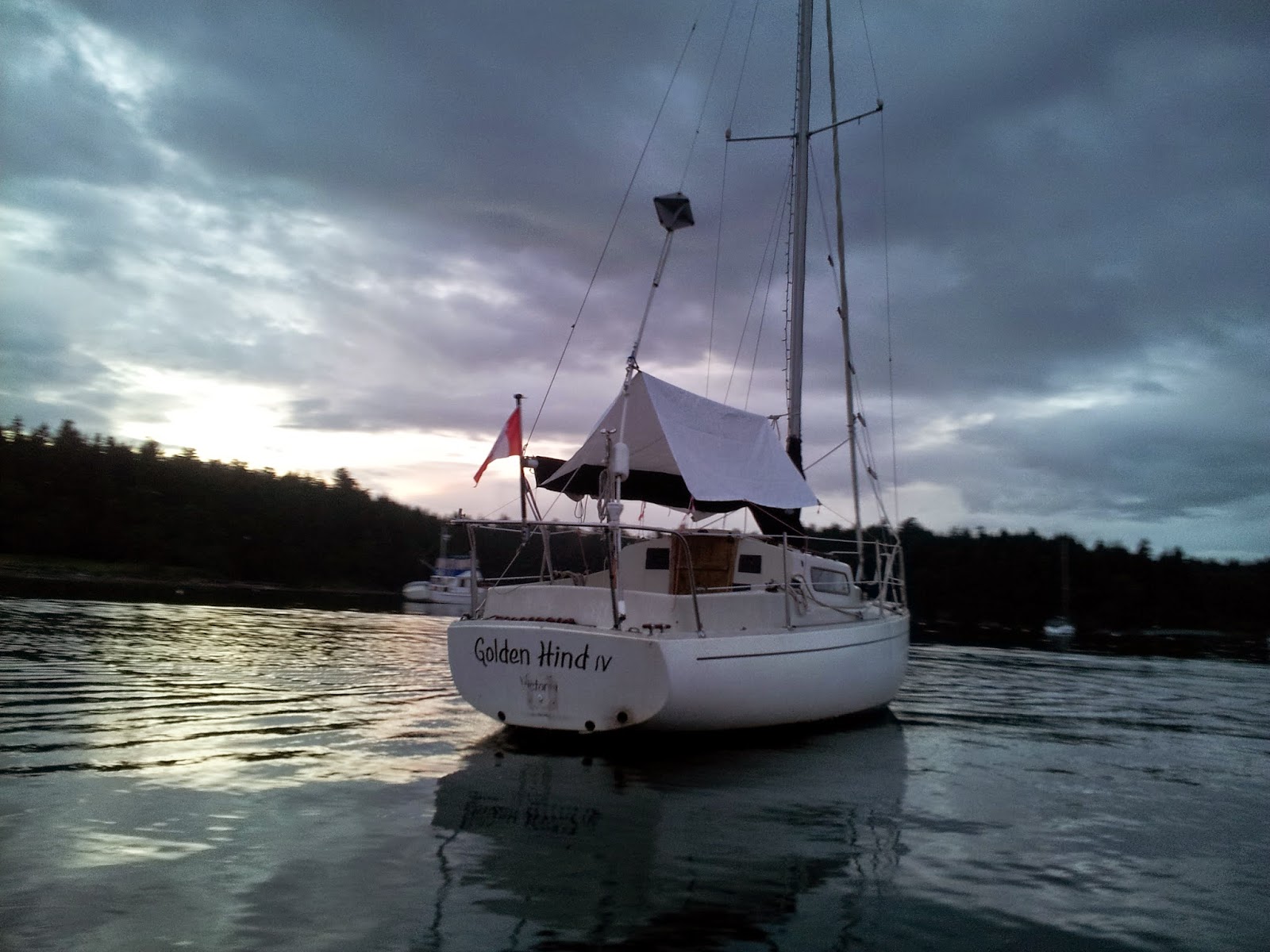 Here the story begins...  I want this blog to document my process I need to follow to get ready to step offshore.  Technical issues to training opportunities like the 2014 Vic Maui which I competed on Team Turicum.. 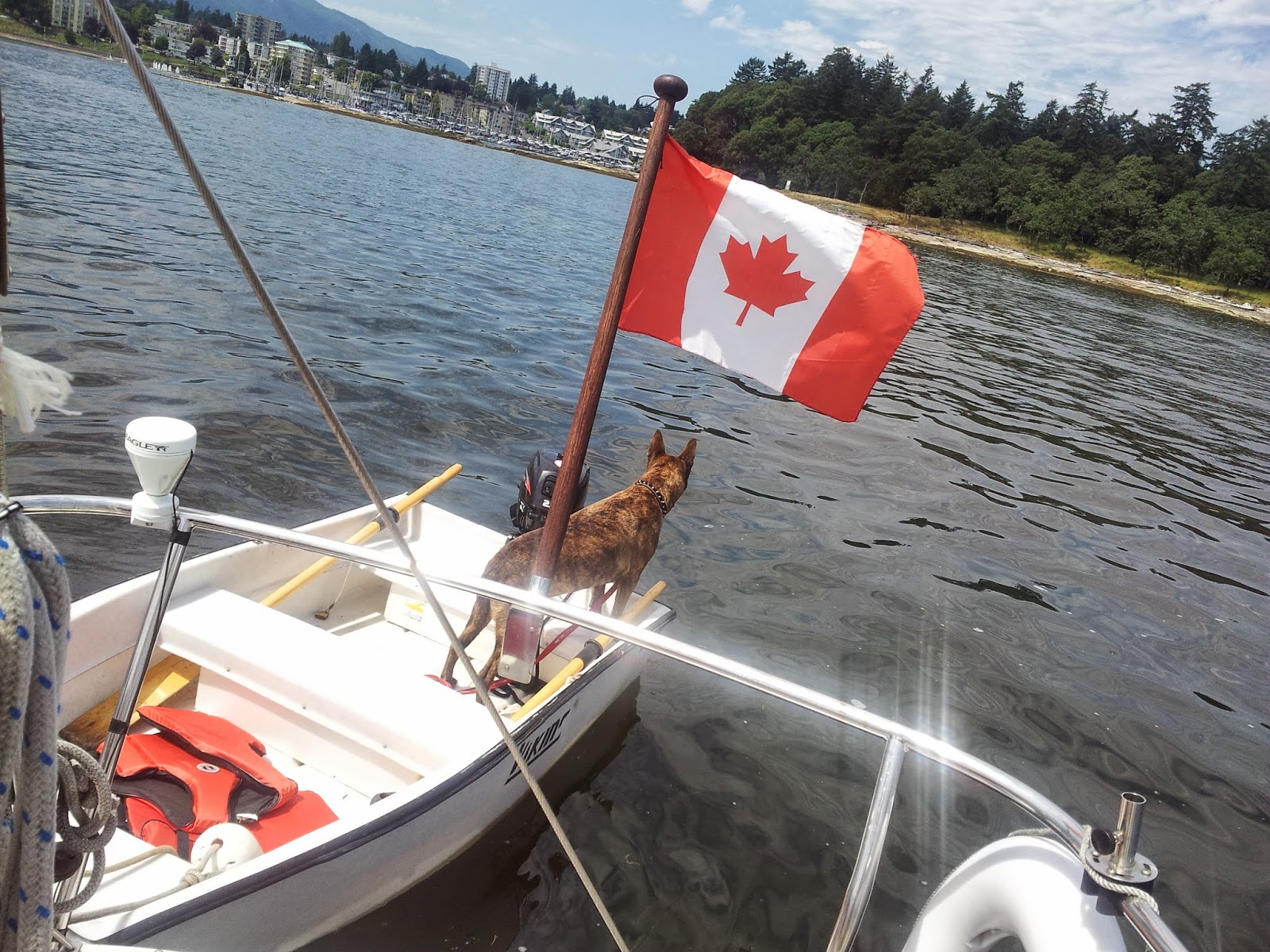 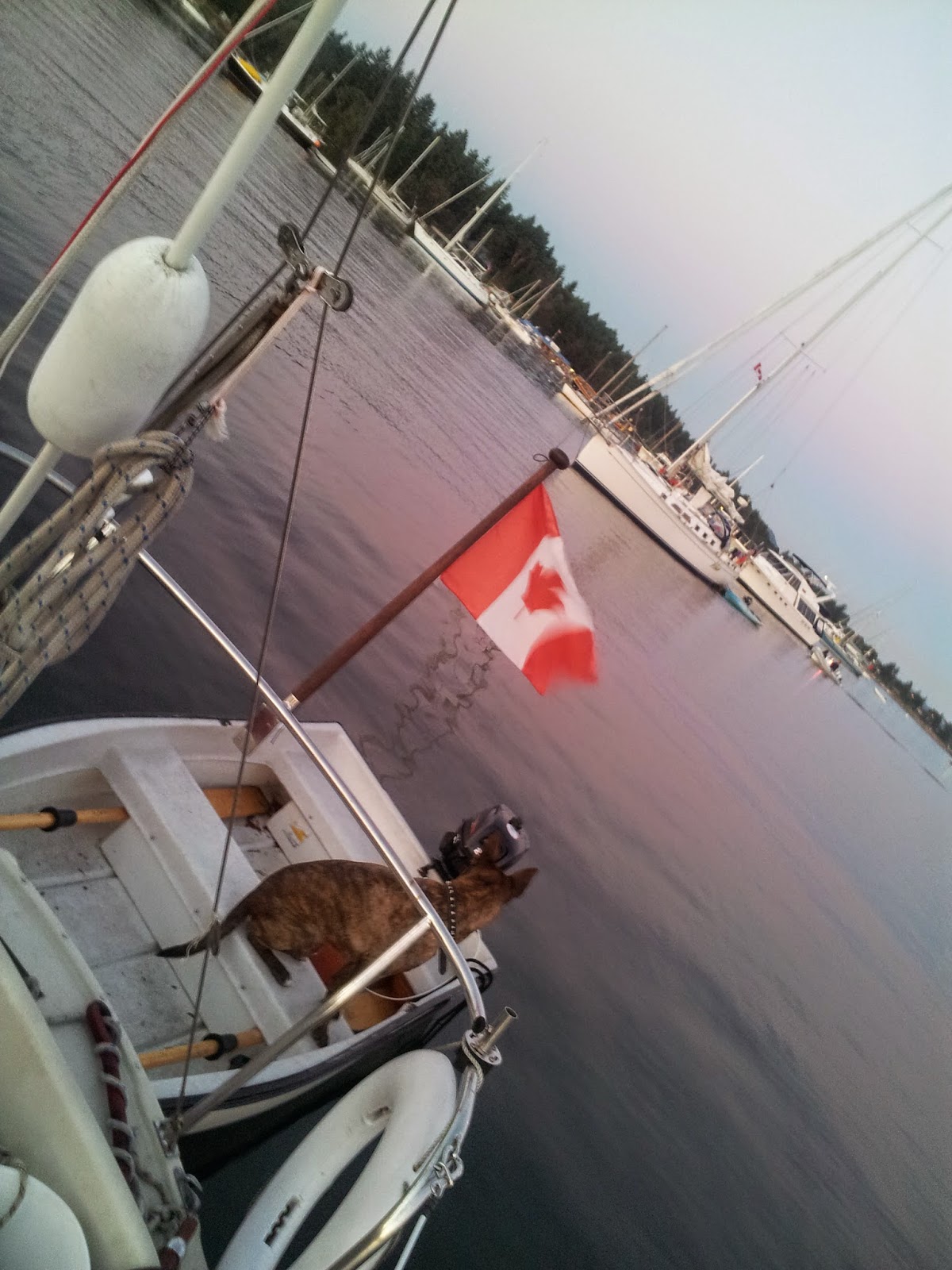 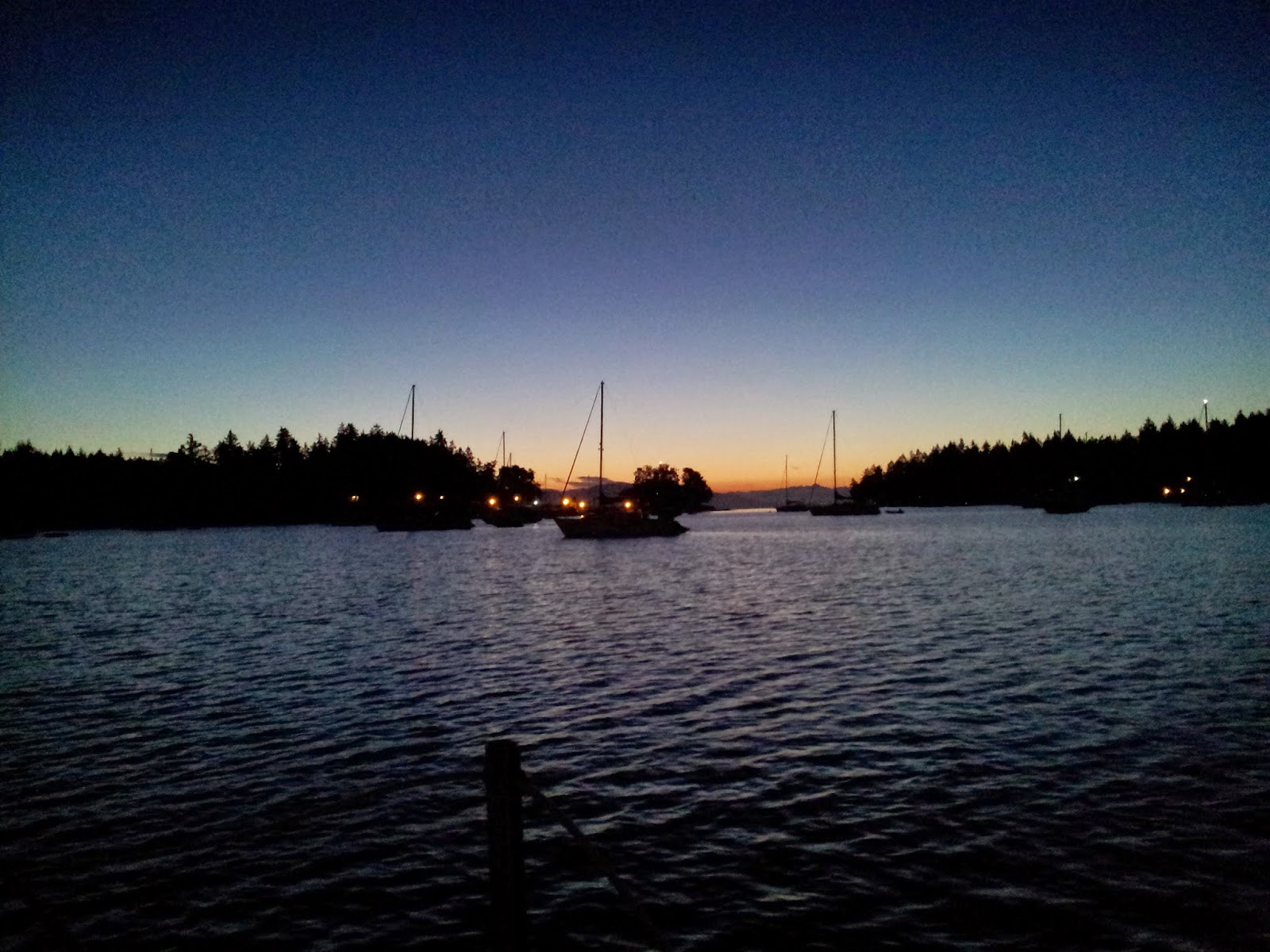 So I decided that I should start moving away from the typical Facebook for documenting my travels and life on the water.  I have been lucky enough to be able to enjoy life the way I want to for the most part.  Aside from being a slave to the working world, I have started to focus for the past few years on my passion...  Sailing. 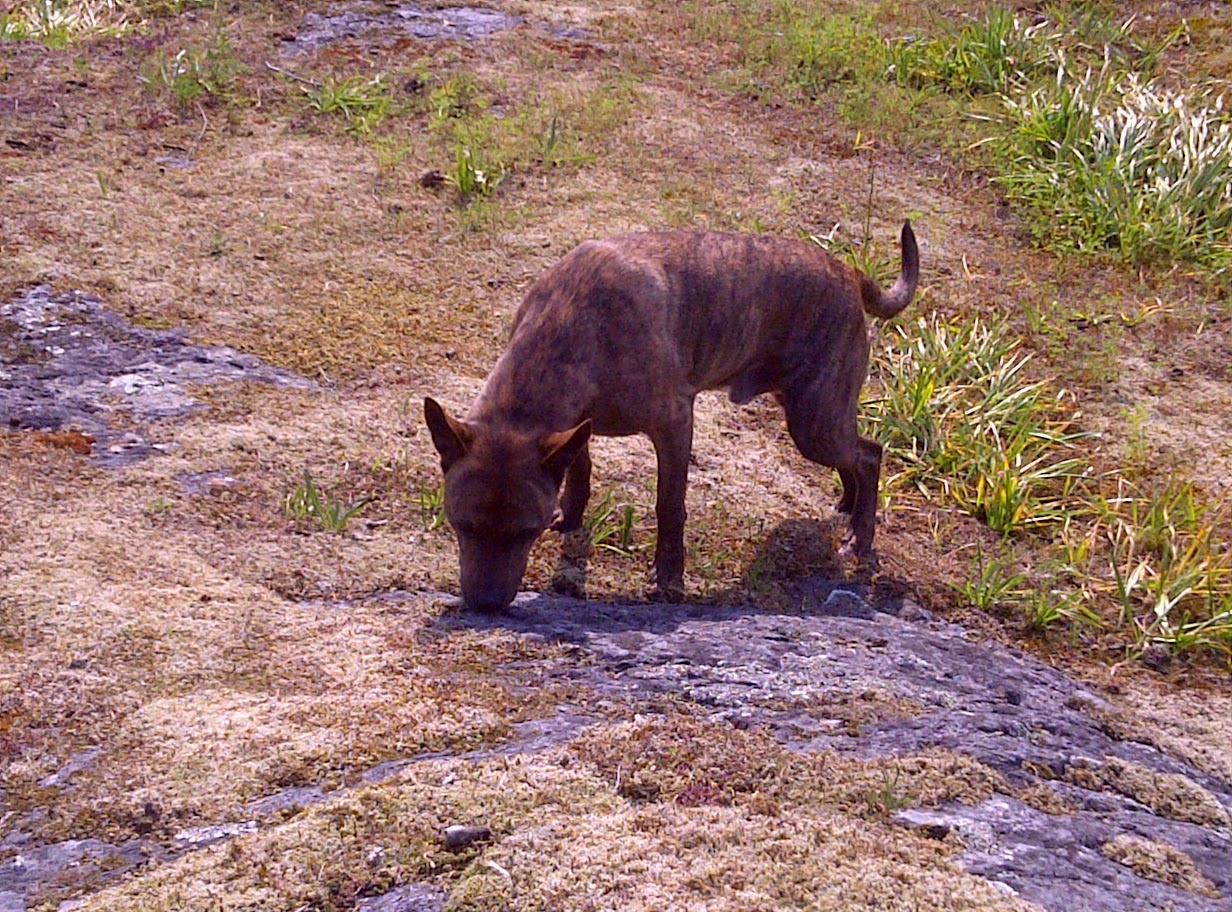 As of the summer of 2014, I have moved onto my little Albin Vega 27 with my dog, Duke and Mylo.  As part of my planning to make the big step from the land to water, I watched many videos and read many blogs about living a minimalist lifestyle.  These helped but one never really understands until you do it.  Upshot of it all, I love it.  The freedom to just pull up anchor and find another private cove is a freedom that many envy.  What it doesn't prepare you for is how much you need to downsize.  Everything you thought you needed, you can pretty much get rid of.  Its hard, like an addiction.  First the thoughts of how you can live without is almost too much to handle, but, once its gone, I don't miss much.  Living like this is taking the passion of sailing to a whole new level.  A lifestyle.  It is a beautiful lifestyle and I hope more and more people can learn to escape the rat race, simplify and find more time for yourself.

This is your life, go live it! 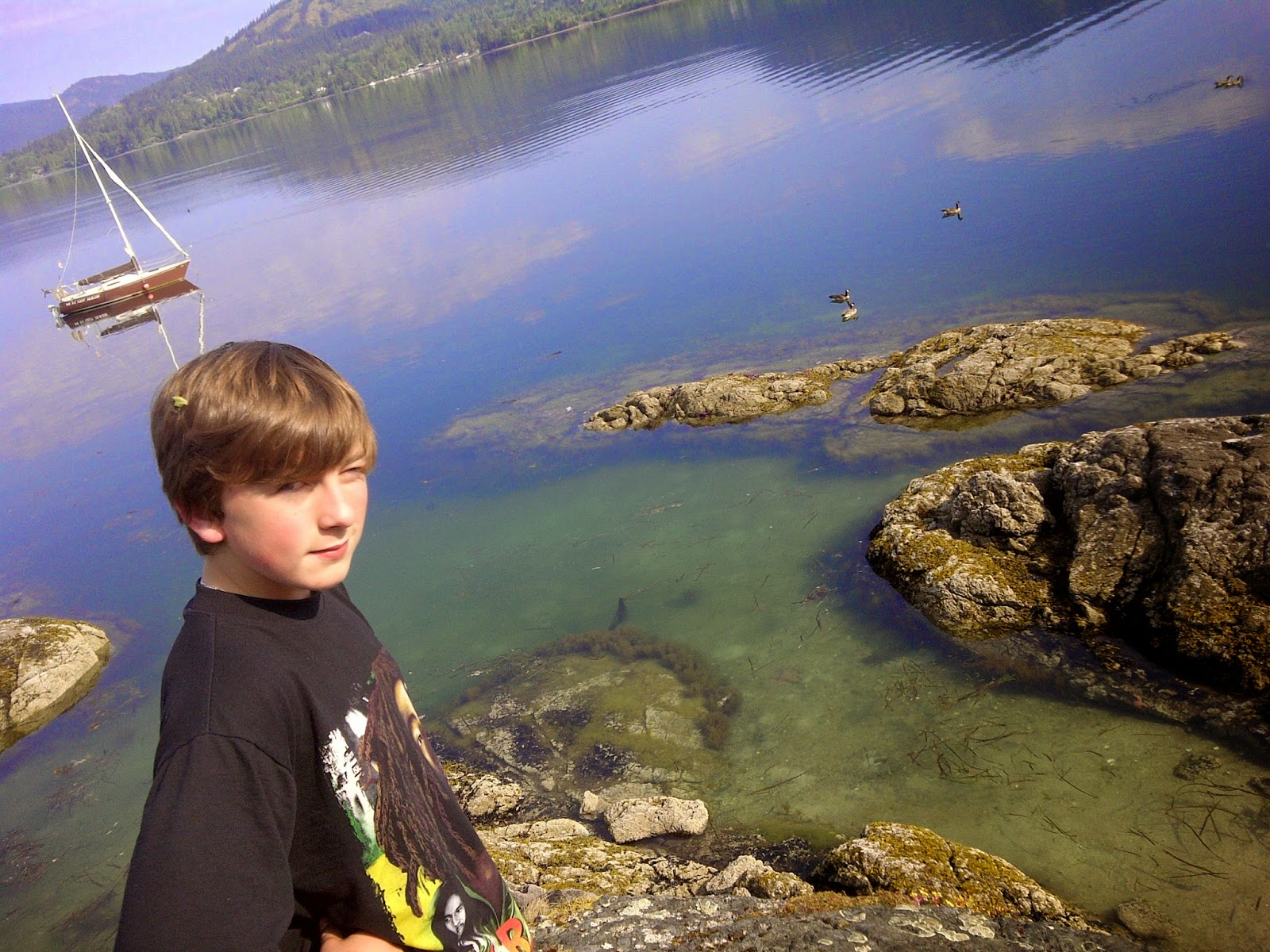